Menu
You are here: Home1 / Education and Teaching 20182 / 1. The Catalan university education system 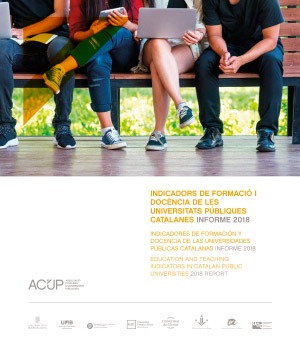 In recent years, the map of Catalan university degrees, with the definitive implantation of courses regulated by the so-called Bologna Process, has undergone considerable change due to the introduction of undergraduate and master’s degrees, the phasing out of cycle (or pre-European Higher Education Area -EHEA-) degrees and the creation of doctoral schools in response to the implantation of such programmes.

In the last five years, the number of undergraduate and doctoral degrees has stabilised, while master’s programmes have increased by 11%, mainly due to the appearance of qualifying master’s degrees.

The culmination of the adaptation of all universities to the EHEA process has been the fulfilment of its main goals:

Achieve a university system that is homogeneous, comparable and flexible with regard to Europe in order to facilitate international mobility.

Promote a competitive higher education system on an international scale.

Promote the European dimension of higher education through joint education and research programmes.

And this has been achieved through a series of instruments that all universities have gradually adapted to:

The adoption of a system of qualifications that is easily comparable and comprehensible throughout Europe: undergraduate, master’s and doctorate.

The establishment of the same university credit system for all European countries: ECTS

The promotion of the mobility of students, lecturers and researchers.

The promotion of lifelong learning.

The establishment of homologous quality assurance systems throughout Europe, through the implementation of quality systems designed under the auspices of Quality Agencies and of different European directives.

During the period analysed in this publication, the diversity of degree courses on offer is especially notable,

with regard to class types: classroom, semi-classroom and distance,

with regard to the growing introduction of subjects or courses taught in third languages, especially in master’s degrees, where there has been 25% growth in the last five years

with regard to courses totally taught in third languages

with regard to the offer of double (simultaneous) and grouped degrees, especially in undergraduate programmes, and

with regard to the different types of international and national interuniversity programmes on offer.

The 2017-18 academic year marks ten years since the first undergraduate degrees were created at Catalan universities, thereby accomplishing one of the goals planned for the deployment of the European Higher Education Area. Since 2008-09, there has been sustained growth in enrolment for undergraduate and, above all, master’s degrees, together with the gradual phasing out of llicenciatures, diplomatures and enginyeries in a period marked by the context of international economic and financial crisis. This circumstance has conditioned the process of adapting undergraduate courses to the new degrees in terms of the availability of additional resources and the creation of new so-called emerging degrees. Nevertheless, enrolment for official university undergraduate and master’s degrees at public universities in Catalonia and the UOC has averaged 190,000 students a year over the last five years.

The same dichotomy occurs en in terms of entrance methods. Students applying to enter class-based public universities mostly do so after passing PAU university entrance examinations (78%). At the UOC, on the other hand, most students have previously taken courses and degrees in other subjects (45%), with a significant number of people that have already begun university studies.

Universities have many mechanisms for forging relations with companies that enable collaboration in strategic research that has an impact on the social and economic development of the country. One of these formulas is through industrial PhDs, which links a doctorate programme with a company or institution’s research project in order to undertake research in a dual environment: business and academic. From 2012 to 2017, 286 programmes have been held involving 352 businesses and 404 students.

Also note the increase in the number of students enrolled for the doctorate programmes offered by Catalan public universities and the high number of doctors that have entered the work force. The employment rate is between 88% and 96% depending on the different areas of knowledge, of which more than 50% are in jobs related with their doctorate studies.

1.5 Funding of education. Grants and subsidies

In recent years, universities have had fewer resources, which has had a heavy impact on staffing, investment in teaching and research, and university infrastructures. Nevertheless, Catalan public universities have continued to maintain and even improve their results, as shown in Catalan and Spanish statistics and their position in international rankings.

The reason for this qualitative improvement lies in the strong commitment of the university community to improving the provision of a public service of strategic importance to the country, more than ever in times of social and economic crisis, based on the shared efforts and collaboration of the university system as a whole. The Catalan Government, which had significantly increased its funding of public universities from 2003 to 2010, introduced cuts during the worst years of the crisis, from 2011 to 2013, with an decrease proportional to other publicly funded sectors. Since 2014, this decline has been halted and there have even been some partial improvements.