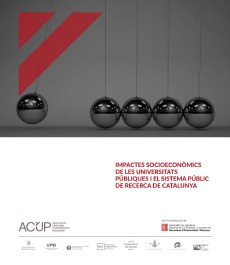 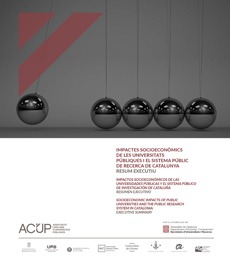 It measures the effect Catalan public university activities and other public RD&I entities have on key variables in the Catalan economy, e.g. the level of revenue/output, Gross Domestic Product (GDP), as-sociated wage and taxable incomes, and full-time employment. We wish to point out that the monetary quantifications estimated in this report does not cover all the effects generated. It is evident that the impacts go beyond a strictly economic dimension, and other dimensions (e.g. cultural or social) should be taken into consideration. There are a range of intangible impacts, which cannot be quantified in mon-etary terms and are not taken into consideration in this study. Impact studies should be analysed from demand and supply perspectives, but in this study only the demand perspective is considered. A new source of underestimation is thus added.

Assuming that this report presents an estimation centred on the tangible effects, focused on demand, an interesting first estimation allows us to check the economic relevance and importance of the public uni-versity system in Catalonia and the public RD&I for the Catalan economy. The figures and reflections in the following pages show, confirm and explain the importance of public universities and other research entities as generators of profit, growth and economic and social development in Catalonia.

The report is structured in four parts. Part one calculates the amount invested by the Catalan Public Uni-versity System (SICUP), which ecompasses all types of activities stemming from Catalan public universities (University of Barcelona, Autonomous University of Barcelona, Polytecnic University of Catalonia (Barce-lonaTech), Pompeu Fabra University, University of Girona, University of Lleida, Rovira i Virgili University and the Open University of Catalonia). Part two analyses the economic impact of the rest of the Catalan public RD&I. To avoid overlaps, SICUP investment is not included in the calculations as this is already done in part one. In part two the RD&I activity of other non-university institutions such as CERCA centres, CSIC, hos-pital research centres, large research-support infrastructures, etc. are calculated. Part three combines the impact generated by SICUP and other public RD&I entities in Catalonia, bringing together parts one and two, which have already been analysed separately. In this way, a wider vision of the quantitative impact of public expenditure in higher education and research is provided; whether university or non-university. Finally, part four gives a qualitative analysis of five key dimensions of Catalan public universities of stra-tegic importance and potential for the country’s economy and society: the labour market, innovation and knowledge transfer, internationalisation, entrepreneurship and social responsibility.

This report is an executive summary. The full report (available in Catalan), as well as all the information on the methodology, other details and the results obtained are available in on the following link: www.indicadorsuniversitats.cat.

This study could not have been conducted without the collaboration of various organisations and insti-tutions in the field. We would like to thank the team from the Laboratory of Applied Economics (AQR- Lab) at the University of Barcelona: Jordi Suriñach, the director; and Joaquim Murillo and Esther Vaya, authors of parts 1-3. Furthermore, we would like to thank the team at University Rovira i Virgili who wrote the fourth part of the report, coodinated by Antonio Duro, and under the supervision of Agustí Segarra and Mercedes Teruel from the Department of Economics, and Pere Segarra and Ma Dolors Setó from the Department of Business Studies.

We are also grateful for the collaboration of those who provided the necessary information to carry out the study. Firstly, the vice chancellors and managers of the Catalan public universities, for their trust and support in sending data. Secondly, Josep Maria Vilalta, Josep Alías and the team at ACUP. Thirdly, those who provided statistical data at all the universities: Mireia Cendrós at UAB; M. Dolors Baena, Maria Mar Bohorquez and Milagros Pérez at UB; Josep M. Gómez from UdG; Carme Sala from UdL; Maria Taulats, Lidia Lepiani and Sara Martínez at the UOC; Santiago Roca and Núria Martínez-Rovira at UPC; Jordi Campos and Lluís Coma at UPF; David Basora from URV. We are also grateful to the many other insti-tutions who provided data: Francesc Josep Abad, Carina Álvarez and the rest of the team at the Office of Planning, Analysis & Evaluation (Àrea de Suport a la Planificació, Anàlisi i Avaluació de la Secretaria d’Universitats i Recerca); Lluís Rovira from CERCA; Antoni Dedeu and Paula Adam at AQUAS; Mariano Sazatornil from Synchrotron Light Source; Alex Puerto at Barcelona Supercomputing Center; Lluís Calvo from the CISC delegation in Catalonia; and finally, Jordi Garza and Xavier López at Eurecat.