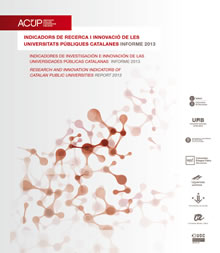 The decrease in economic resources dedicated to research and innovation has not yet had a visible effect on scientific production, which actually shows a slight growth in comparison with the previous period analysed.

In quantitative terms, the data from the SIR 2012 maintains similar values to that of the previous year. Universities produce 57% of the scientific production of Catalonia, while hospitals and health centres, mainly those assigned to universities, provide 36% and other research centres (government sector) 7%.

From the qualitative point of view, the Catalan research system as a whole is, along with Great Britain and Belgium, part of the reduced group of countries that show a high impact of their production with low R&D costs, in comparison to their GDP. If the population and wealth generated (GDP) are taken into account, Catalan universities maintain average positions with respect to the map of European and worldwide universities, both in terms of scientific production as well as their average standardised impact.