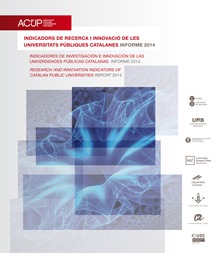 Attracting financial resources at Catalan universities, through both competitive and non-competitive funding, is one of the key indicators used in the analysis of research and innovation activities.

In general, the indicators pertaining to fundraising for the research and innovation of Catalan public universities in 2012 have continued on a downward trend both in terms of funds from national programmes (Catalan and Spanish), as well as those from non-competitive sources. The economic returns (€55.4 million) for participation in the 7th Framework Programme of the European Commission is the only area which has continued on an upward path (27%), which in particular has grown compared to 2011 (€43.4 million).