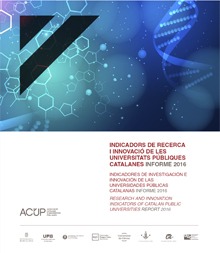 The results of the research and innovation activities analysed in this year’s edition of the report illustrate, once again, the strength and relevance of the scientific production achieved by the Catalan system of research and knowledge transfer and, in particular, the Catalan public university system, despite the global context of reduced economic resources dedicated to this area.

For another year, the scientific production of Catalan universities, at 54.8% of the total production, leads the output generated by Catalan research institutions, outstripping hospital and research institutes. Moreover, these publications measured in terms of impact show an improvement on the results of the previous period, and put Catalan universities among the top ranked institutions in the Spanish university system. As an illustration of this, the average number of publications per full-time researcher in the Catalan system 2015 (1.37 publications) is 71% higher than that of public universities in the rest of the state (0.80).

This positive dynamic can also be observed in the creation of doctoral theses. In fact, during the academic year 2014 to 2015, 2354 theses were defended in Catalan public universities, an increase of 5.4% in comparison with the previous academic year, and a 31% increase on the previous five years. This data demonstrates the high training capabilities of the research personnel in the universities in all fields. As for the international aspect, 34.5% of these theses were defended by foreigners.

In the European context, when scientific output is related to population and wealth generation (GDP), the Catalan research system occupies an advanced position and is now part of a small group of countries that have a low level of spending on R+D in relation to GDP, yet achieve a high impact on scientific production.